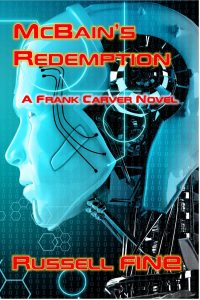 Timothy McBain was wanted for the murder of seven people in his attempt to take over California. To prevent his capture, he tried to use his brother as a decoy and ordered him to be killed. He managed to escape, and now he has a new and more ambitious plan. He wants to take control of the U.S. government. He’s callous and unfeeling, but he’s also the most brilliant software and robotics engineer on Earth.

This book is a sequel to Dreamscape.